You are here: Home / themes / circular / Towards smart circular economy; the role of digitalisation

The Digital Development and Society Forum of the Spain Digital Foundation supported by the Insight Foresight Institute (IFI) has prepared a dossier in Spanish entitled “Towards the Intelligent Circular Economy; the role of digitization” tries to contribute ideas proposing to take advantage of the potential of digitization to change the model of the current linear economy towards the new system of Circular Economy. 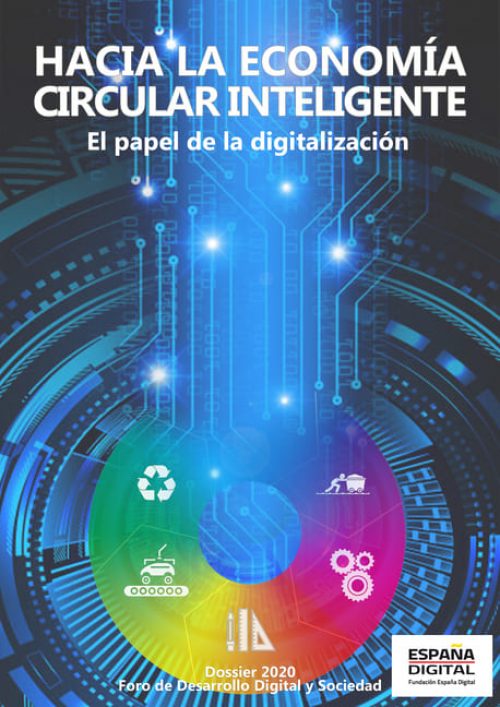 As indicated in the document, its objective is to explain the connection between digitization and the Circular Economy as well as to suggest actions that can accelerate the implementation of this new economic model. The series of specific objectives can be summarized:

The dossier specifies some of the challenges to be faced in the search for this particular type of economy and identifies a series of barriers that must be taken into account, classified into three main groups:

As an example of the capabilities of digitization to accelerate the transition to a Circular Economy, the main axes included in the Spanish Circular Economy Strategy are detailed; Spain Circular 2030 presenting three hypothetical cases applicable to some of them, specifically in the productive sectors of transport (urban eMobility), agri-food and tourism.

After the conclusions highlighting the fundamental role of digitization, the dossier ends by proposing lines of action to promote its role in the Circular Economy.

The Spain Digital Foundation publishes this dossier in support and collaboration towards the full implementation of the new Circular Economy system. This proposal acquires special importance at present as evidenced by the approval by the Council of Ministers of Spain, on June 2, 2020, of the aforementioned Spanish Circular Economy Strategy EEEC; Spain Circular 2030.