You are here: Home / Archives for Outreach Competences / Outreach Insight 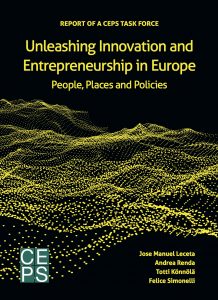 Link to the free pdf

Unleashing innovation and entrepreneurship in Europe: People, places and policies from Totti Könnölä

Juan Mulet, the member of IFI Innovation Council writes in Cinco Dias, one of the leading economic daily papers in Spain on how innovation, purchase and employment are, or should be, connected.

The 1987 Nobel Prize for Economics, Robert Solow, proved that the four fifths of the United States economic growth of the first half of the past century, were the consequence of having improved the way in which the production factors were combined. Back in the days it was called a technical change, nowadays we would call it “innovation in its broadest sense”, or, as the economist prefer “total productivity of the factors” (TPF). Only the remaining fifth of the mentioned growth, was attributable to the increase in the use of capital and labour. According to the OECD, between 1985 and 2010, the contribution to the (TPF) to the GDP growth between 1985 and 2010 was of 72% in Germany, of 63% in South Korea and a 52% in France. This percentage represented only a 13% in Spain. It is obvious that our economy hasn´t experience the improvement in the use of capital and labour, one of its main ways and opportunities to grow…

Read the full article in Spanish.

The European Institute of Innovation and Technology (EIT) is part of Europe’s most recent efforts to change entrepreneurial innovation policies into successful practices. The EIT exemplifies an experimental shift from today’s EU-level interventions and current emphasis focused on trans-national collaborative projects (in R&D) towards a new paradigm in fostering Pan-European entrepreneurial innovation ecosystems that stresses human capital and attitudes through enabling innovation spaces. The EIT offers an opportunity to learn from European innovation policy experiment to promote the formation of inter-connected local entrepreneurial innovation ecosystems and to innovation in policy more generally in connection with European Union practice. The following constructive remarks are a set of pointers suggesting specific key areas for further progress.

N.B. A worth reading reference is (Tindemans and Soete, 2007), whereby a ‘hybrid model’ for EIT with manageable number of partners per KIC was proposed, in between the initial fully centralised EIT/KIC and the adopted fully decentralised EIT/KIC model actually implemented: a so-called ‘Cluster EIT’ model for the KICs would mean splitting too large KICs into more numerous but smaller KICs 2.0 closer to the logic of Co-Location Centres. KICs 2.0 would capture local nature of knowledge, reduce KIC 1.0 overheads and re-set collaboration and competition at EIT level. In addition, the report proposed a ‘European Innovation Fund’, which somehow reminds of the ‘European Strategic Investment Fund’ (ESIF). As the mid-term evaluation foreseen in the Horizon 2020 context approaches, it would be interesting and appropriate for the EIT and KICs to courageously self-evaluate progress and achievements in advance. IFI fully supports the Commission to carry out an independent assessment that would greatly benefit from inputs from all three Knowledge Triangle competent Directorate Generals and observers in the Governing Board, thus recreating balance and providing expertise.

A new coalition is set to create an innovative ecosystem in Spain. The Royal Academy of Engineering sponsors the Forum E2 I2, to unite innovation actors with allies including RedEmprendia, la Fundación Transforma España, el Foro de Empresas Innovadoras and European Institute of Innovation and Technology.

The Royal Academy of Engineering together with the experts of Insight Foresight Institute (IFI) coordinates the Forum E2 I2 + Education + Entrepreneurship + Innovation + Investment, a meeting point of experts from member companies and the world of academia seeking to address the major challenges in these areas in a coordinated manner.

“This is to encourage understanding what’s working and what must be improved,” says Elijah Ferreres, president of the Royal Academy of Engineering.

“Now we have an opportunity to do different things. The ecosystem allows us to guide new policies, in academia and in the corporate world, “explains Senen Barro, president of the RedEmprendia.

“This is to introduce innovation beyond the ICT sectors such as textiles or the food sector, which accounts for over 20% of Spanish GDP, “says José Molero, president of the Forum for Innovative Enterprises. He adds: “we must create a strategic framework with new policies”.

Meanwhile, Eduardo Serra, president of fundación Transforma España, points to the lack of collaboration between the different actors. “In countries like USA exists flexibility and relationship between different sectors. The professors go to companies, etc.. However in Spain there are a great reluctance to produce these relationships.”

José Manuel Leceta, chairman of IFI (director of the European Institute of Innovation and Technology at the time of the forum kick-off) also points to the importance of a comprehensive approach to economic transformation, education and business to promote innovation ecosystem.